Close
Ask a Question
Home/ Inheritance/Inheriting Timeshare: What You Need To Know

Inheriting Timeshare: What You Need To Know

Many people are keen to be rid of their timeshare and not pass it on to their children, often taking on legal representation in order to get the contract annulled. Others, however, are happy with their timeshare arrangement enough to wish to bequeath it in their will. And if you are the recipient of this bequest, you may be less thrilled by inheriting a timeshare than your deceased loved one imagined.

Few people wish to receive a timeshare in a will, as it has negative value. This means it is not worth what was paid for it, and may be less of a gift so much as a burden. Nonetheless, it is important to note that inheriting timeshare does not necessarily mean that you are stuck with it.

What To Do When Inheriting Timeshare

Whatever you do, however, do not use the timeshare at all. This includes going to ‘check it’ in person, as well as using it for a holiday. If you do so, it proves you have some interest in the inheritance, and will make it legally much more difficult to get out of inheriting a timeshare.

Secondly, of course, you must seek out the clause that specifies what is to be done with the timeshare in event of the holder’s death. There is an outside chance that the contract states that it is annulled in the event of death, but this is unlikely.

Once you have checked the contract terms about inheriting a timeshare, then it is time to get a timeshare lawyer to help you. If the contract is found to be illegal, due to an in perpetuity clause (where the term exceeds fifty years), legal steps will have to be taken against the timeshare company.

In all other instances, your timeshare lawyer will help extricate you from the burden of inheriting a timeshare by aiding you through the process of disclaiming it. You will need to sign a written refusal of the timeshare inheritance, which must be filed within a specified period of time in order to be valid. If you are a minor, the clock starts ticking from the time you come of age, so should be signed as soon after that time as possible.

Once you’ve signed the disclaimer, it is usually the case that the timeshare inheritance will be passed to the next in line, who will, in turn, have to sign a disclaimer. Therefore, it is important that you let other people, family and friends, know – so that they are prepared if the responsibility falls on them next.

Once the disclaimer is signed, the lawyer dealing with the timeshare release will have to take some further steps to get the contract nullified. Once these steps are complete, you should be free from the burden of inheriting a timeshare altogether.

As any death inevitably leads to some legal issues needing to be taken care of, timeshare inheritance will always be a part of the process. However, it is one that cannot be dealt with alone, so it is very important that you engage legal representation as the first step. A qualified and experienced timeshare lawyer will be able to guide you through the process of what to do in the event of inheriting a timeshare and help to extricate you from the burden legally, and with as little fuss as possible. 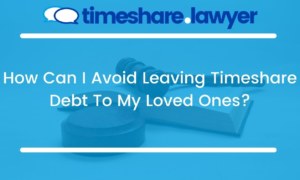 How Can I Avoid Leaving Timeshare Debt To My Loved ...