The Scandal Around Loans for Timeshare Purchases

Barclays Partner Finance, formerly known as Clydesdale Financial Services is under fire for not carrying out due diligence against loans granted by the company to fund timeshare purchases.

After being harangued into signing a timeshare contract they could not afford by timeshare sales reps, unwitting holidaymakers have been further duped into signing extortionate finance agreements. Many of these agreements were funded by Barclays Partner Finance. The typical loan of this kind is set with interest rates and APR at 17.6% over a 15-year period, which equates to a timeshare priced at £10,600, when fees and interest are added, costing over £29,000 – far outside the affordability of the signee.

What’s even more disturbing is that, in many cases, those unscrupulous timeshare sales staff have provided false information on the finance documents in order to get them approved. When assessing the finance documents, people have found that their income had been entered incorrectly, and furthermore, the loan had been granted for ‘home improvements’ – not timeshare! This is fraud, committed by the sales staff and inculcating the signees without their knowledge.

Usually, details like this would be checked thoroughly before any loan company would approve it. I mean, no legitimate loan company would actually charge a retired couple on a small pension £40,000 for a timeshare – but that is exactly what Barclays Partner Finance has been found to have done.

As a result of these loans being approved without properly assessing the affordability criteria, many people are finding themselves in Court, disputing the finance agreements funded by Barclays Partner Finance.

Sadly, however, Barclays is not the only company in the spotlight for its slapdash approach to loan approval.

Timeshare personal financiers, First National Trust Company, joined forces with Shawbrook Bank to ‘help’ Britons finance timeshare. The relationship allowed more people than ever to take out finance in order to obtain a timeshare. They were able to do so quickly, as the relationship meant developers were given the freedom and resources to push through applications without the customary delays involved in loan applications.

British residents were able to finance their holiday ownerships with unsecured loans through Shawbrook Bank from £1,000 to £50,000. However, just like Barclays Partner Finance, sufficient due diligence was not carried out – meaning that Shawbrook had not conducted a proper risk assessment before granting the loans. As a result, people were lumbered with loans for timeshare purchases that they simply could not afford.

Shawbrook Bank has admitted its wrongdoing in respect to its inadequate due diligence and risk assessment around loans for timeshare purchases, and is now paying the price.

It was found that millions of loans were approved incorrectly, having been inadequately assessed. It is claimed that the ‘error’ was a result of ‘a breach in their risk management system after an upgrade’. Shawbrook’s Finance Director handed in his resignation shortly after the news broke.

Shawbrook now has to set aside £9 million to cover the fallout from £14.7 million worth of high risk loans that it had approved.

We still don’t know the full result on Barclays Partner Finance, but judging by the consequences of Shawbrook Bank’s actions, there could be a lot of money due back to timeshare holders who fell into the finance trap. 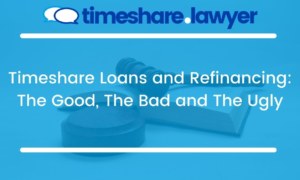 Timeshare Loans and Refinancing: The Good, The Bad and The ...