Timeshare Law is a bit of a minefield, but now is a better time than any for those who are stuck in unwanted timeshare agreements.

Recent changes to the laws surround timeshare agreements and the companies who sell them have created a glimmer of hope for the innocent people who have fallen victim to these companies.

The good news is that, finally, the immoral actions of unscrupulous timeshare companies are being recognised as illegal in the eyes of the Spanish law.

Here are 5 quick tips for understanding your position within current Spanish timeshare law.

All timeshare contracts will include a ‘cooling-off period’. This is a period of time in which you, the consumer, have the legal right to change your mind and back out of a contract you have signed.

As of January 1999, it is, in many cases, illegal for the timeshare company to take any money for during this period of time. If they have, then you are in a very good position for taking legal action against them.

It is widely considered to unlawful to include a perpetuity clause in any timeshare contract.

In this context, perpetuity means anything that lasts for more than 50 years. Timeshare companies try their best to get as much money from you for as long as possible, sometimes it even gets passed on to your family upon your death.

It is against the law to enforce a perpetuity clause for timeshare agreements. If you have signed a contract including one, seek legal advice instantly. You might be entitled compensation and the whole contract may even be rendered null and void.

Traditionally, timeshare agreements give their owner a set week every year in which they can have access to the property. However, there are also contracts out there offering a ‘floating week’ (or ‘Flex Time’) clause.

This means that you don’t have a set week to use the property. Instead, you have supposedly free choice over when you cash in your annual week. The timeshare companies will try and tell you that this is a great offering, allowing you flexibility year after year. Wrong.

In reality, floating weeks result in nothing more than stress, frustration and wasted money. Organising and arranging the use of the property with these type of contracts has proven so difficult that, in many cases, it has now been labelled as unlawful.

Somewhat more difficult to define and open to interpretation, but still worth noting. Courts have been known to find in favour of people who have signed contracts that have been proven to include dishonest, intentionally confusing language. Sometimes it is so confusing that it borders on being fully dishonest.

If this is the case, and you can persuade the courts to agree, compensation and nullification are a definite possibility.

Finally, because timeshare law is complicated and the timeshare companies will try everything to put you off pursuing them for compensation or nullification, we cannot stress enough the importance of finding a qualified timeshare lawyer.

Pursuing compensation takes a long time, in which the case goes through many different phases, facing challenges at each one. Facing the process alone will require 100% of your time and attention, and even then you are fighting a losing battle.

David and Goliath is all very good in fairy tales. In reality though, you need someone by your side, looking after your interests. Find a lawyer to do so and you’re far more likely to win the compensation that you deserve.

Timeshare law is convoluted and fluid, always adapting and always changing. In order to navigate it efficiently, you will need good legal advice. Timeshare.Lawyer will be able to help guide you to a victory in the courts.

Why Can't I Just Hand Back My Timeshare? 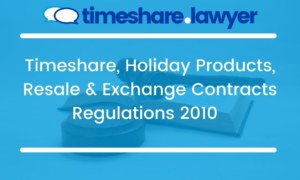