In this post, we will fill you in on what to do in two situations related to bankruptcy and timeshare. In the first part, we will consider the course of action to be taken should you find yourself needing to file for bankruptcy. Secondly, we will go on to discuss what happens when a timeshare developer goes bankrupt. Whether you’re the one in trouble, or whether you’re just concerned about what will happen following the loss of the original timeshare developer, read on and find out more about your rights and what actions you should take.

Filing for bankruptcy is an unpleasant process to have to go through. It means that your financial situation has become insurmountable, to the point where you can no longer sustain nor cope with financial obligations. It can be dispiriting and upsetting, but it can also mean the opportunity for a fresh start. Dealing with bankruptcy and timeshare release together is a chance to open a new phase in your life, free from the financial burden that timeshare brings.

If you are approaching the realisation that your timeshare is a significant part of the financial burden leading you into filing for bankruptcy, there are some steps that should be taken first. In assessing your financial obligations, it is important to take your timeshare into account. There may be ways to get out of the timeshare, which may help you to alleviate some of the strain that is causing your situation.

Engage a timeshare lawyer to look at your contract. They will be able to cast their professional eye over it to ascertain its legality. It is becoming increasingly apparent in recent years that many timeshare contracts are unlawful, and are often considered null and void in a court of law. Whether your timeshare contract is illegal is not easy to ascertain with the naked eye. It requires an experienced lawyer to be able to spot the parts that they know could lead to a legal case against the timeshare company.

Where a timeshare contract is found to be unlawful in court, it is often the case that, not only will the contract be nullified, but also compensation will be due to the claimant (you). You may stand to have your maintenance fees, legal costs, and any other costs accrued during the period of the contract refunded to you, either in full or in part.

By taking this route, you may be able to avoid bankruptcy and timeshare will no longer be a concern for you. After all, bankruptcy should be considered the last resort, as it will have a detrimental effect on your ability to acquire credit, including a mortgage, for seven years or longer. If there is anything that can be done to avoid bankruptcy, these steps should be taken as a matter of urgency.

Going Ahead With Bankruptcy and Timeshare Implications

All cases of bankruptcy in the UK are handled by an official receiver, who works with the bankrupt person to nullify debts. The official receiver will contact the timeshare company to inform them of the situation and ask for details of any outstanding service charges. These will need to be dealt with by being offset against the proceeds from selling the timeshare.

However, if you are in a situation where you are filing for bankruptcy because you have had financial problems for some time, it is likely that you will have accrued significant arrears on your timeshare maintenance payments. If this is the case, then this will leave very little left after the timeshare has been sold – effectively meaning that selling the timeshare is just not worth it.

You will be asked to present the timeshare contract, as well as a full list of outstanding charges and any paperwork associated with a related finance agreement. The timeshare agreement will then be forwarded to the company who will be dealing with selling the timeshare, which is something that Timeshare.lawyer can help with, providing you with guidance about timeshare resale companies that will be prepared to take on the timeshare.

Whatever path you need to pursue, Timeshare.lawyer is experienced and knowledgeable enough to be able to guide you through. If timeshare is causing you financial strain, it is important that you contact us directly as soon as possible, as we will be able to help you achieve the best possible outcome. It could be the best decision you ever make.

2. It’s Not Me That’s Bankrupt, It’s My Timeshare Resort!

Of course, you may be reading this not as a person with financial difficulties yourself, but as somebody concerned about the news that your timeshare resort is in financial difficulties. This usually means that the developer (the party who owns the entire resort and land on which it stands) is no longer able to afford their financial obligations, putting the future of the resort in jeopardy.

The first thing to know is that it is extremely unlikely that this situation will result in the total loss of your timeshare. But this is not to say that some changes may be coming your way that you need to be ready for.

The most likely situation is that a new developer will take over ownership of the resort. This on its own is unlikely to result in any changes, but what comes with the new developer may do. A new developer may be inclined to bring on a new management company to handle the day to day running of the resort, in which case you may experience some changes to what you’re used to.

These may be negligible – new staff or reception opening hours, for example. A problem arises, however, when the new management is not as concerned with keeping up the level of service or standard of repair as the old management company. Worse still, some timeshare owners find that their annual maintenance fees suddenly increase with the arrival of new management. If this happens, you should request a full breakdown of where your maintenance fees are being spent, which you can cross-reference against the costs in your previous maintenance bills. It may be possible to request these retrospectively from the old management company, if you do not already have this information. By cross-referencing costs, you may be able to point out to the new management how they could lower costs, though there is little chance they will heed your suggestions.

If the new costs are unacceptable in any way, contact a timeshare legal expert to help you establish what your next steps should be.

Where a new developer takes over your timeshare, you will be asked to sign a new contract. This is because the old contract only applies to terms set out under the previous developer, and must therefore be updated. It is important to tread carefully here, and do not sign the new timeshare contract until you have consulted a timeshare lawyer. It is not uncommon for new developers to use the opportunity of a new contract to bind existing timeshare owners in for a longer contract term, or to introduce unsavoury clauses into the contract that may compromise your rights in some way.

Especially if you have been considering a timeshare exit, it is vital that you do not proceed with signing any new timeshare contract without conclusive legal support.

We have encountered numerous reports of timeshare owners who have been forced to move to a new resort following a timeshare developer’s bankruptcy. Again, this cannot occur without your agreement by way of a new contract. In some cases, the new resort is a welcome change, and may even be better than the original site. Unfortunately though, this is not always the case and timeshare owners find themselves accepting a home resort in a less desirable location, in a poorer state of repair, or of generally inferior quality to the timeshare resort they chose when they signed up. Again, before signing a new contract, demand a tour of the new resort and ascertain whether you are satisfied with the change. Remember, you cannot be forced to continue your timeshare ownership under new terms, including a different resort, without agreeing to it through the signing of a contract.

If you refuse to sign the new contract, you will need the services of a timeshare lawyer to help extricate you from your responsibilities towards the timeshare.

Wherever changes are made to your timeshare, a new contract will need to be issued. If your developer goes bankrupt, it is unlikely that the resort will be lost altogether, but when it is you will probably be asked to accept a new resort as part of a newly issued contract. Where the resort is kept in tact, a new management company may take over and make alterations to the general running of the resort. If any of the above is a concern, it is important to enlist the services of a timeshare lawyer before proceeding with agreement to any new timeshare contract. 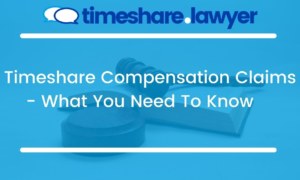 Timeshare Compensation Claims: What You Need To Know